Saved Searches Advanced Search
On Monday, February 24, from 7am -  4pm, Chinook Arch will be migrating servers. During this time, library patrons will be unable to access their accounts online, and phone and email notifications will not be sent. Access to digital services including Libby, Hoopla, and PressReader may also be temporarily disabled. Thank you for your patience during this temporary service interruption.
Print 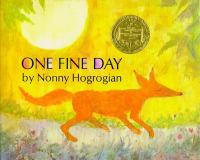 I would recommend “One Fine Day” to parents and teachers because it is a great book for children. This book is a quality read. It show many places one can go should you be determined, hence, the underlying context. If you want something you will work hard enough to go get it and do not take anything that doesn't belong to you. The fox goes through different obstacles to get back something that is near and dear to his heart. The only thing is, is it really worth it? I believe that it shows the difficulty of pleasing friends and pleasing individuals. The ending has a satisfactory kick to it that I know the children will love and illustrations that allow the story to come alive.

This is a great book for children to read, or have read to them. The illustrations that are presented in this book will catch the imagination of just about any child. Children go through pints in their lives here they take something without asking, and that leads to them loosing something in return. This book is almost as catchy as a nursery rhyme considering all of the places the fox had to go, and all of the people he had to talk to before he was attained what he really needed. This is a great children’s book, and a must read as well.

A fox indulges in something that does not belong to him and has nothing to repay the debt, so the collector takes something that means so much to him. He must go through different people and different obstacles to get back what is rightfully his.

One day, a fox was traveling in the woods and ran across a pail of milk that was for an old lady that was picking sticks off of the ground. When the women saw the fox drinking all of her milk, she cut his tail off at once, and asked for her milk back in return. Will the fox be able to return the milk for his tail? This is a great story of a thirsty fox searching for a milk to get his tail back.

“One fine day a fox traveled through a great forest when he reached the other side he was very thirsty. He saw a pail of milk…before she noticed the fix, he lad lapped up most of the milk… the women became so angry that she grabbed her knife and chopped off his tail. Give me my milk she said and I’ll give you back your tail.”

"Oh kind miller, please give me a little grain, I have to trade it for the egg to pay the peddler...to give milk to the old woman..."

There are no notices for this title yet.

Find it at Library